This walk was 8 miles in length and had 7 walkers.
Walking commenced from the Woburn car park, through the village on toward Speedwell cottages where we entered the deer park

Making our way via Paris house up to Battlesdon Avenue 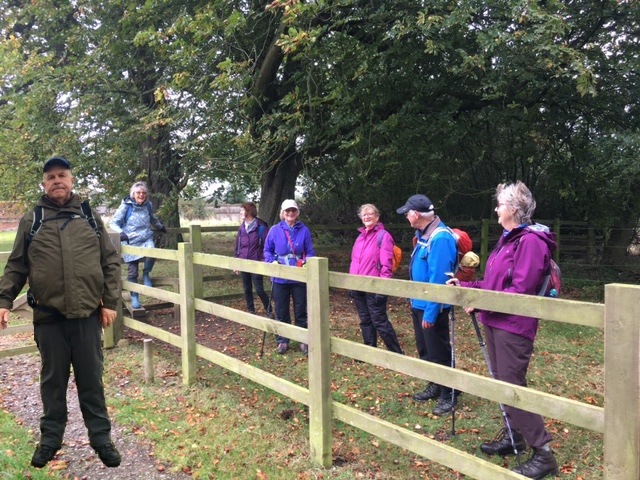 Over the style at Milton Lodge 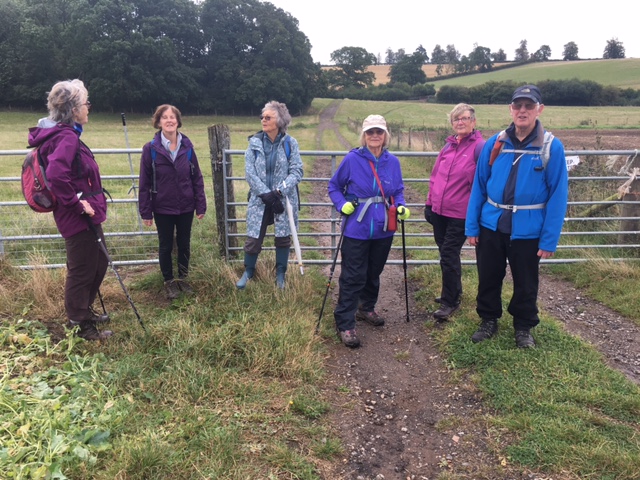 On the track up to Potsgrove 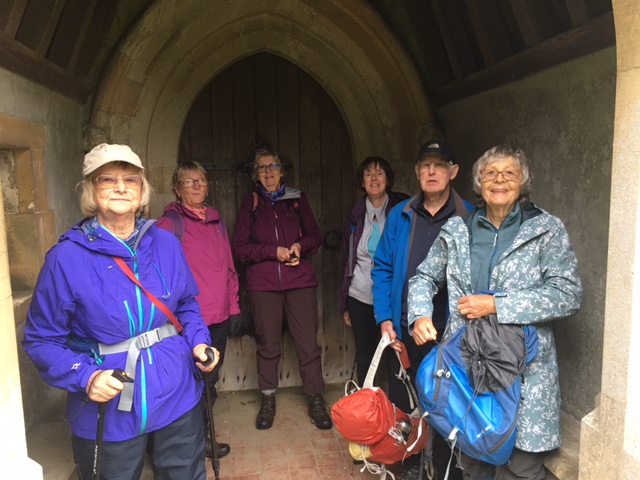 Refreshments being taken in the doorway at Potsgrove church which was open so we could have a look around this disused church.
Walking through the hamlet of Potsgrove following the tracks back towards Woburn and the small woods back to the car park 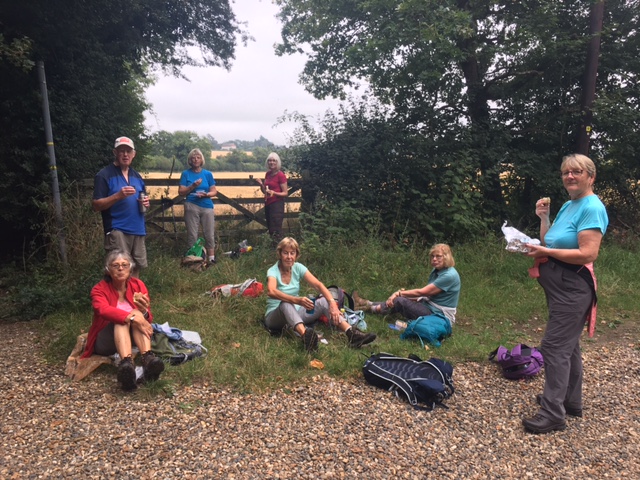 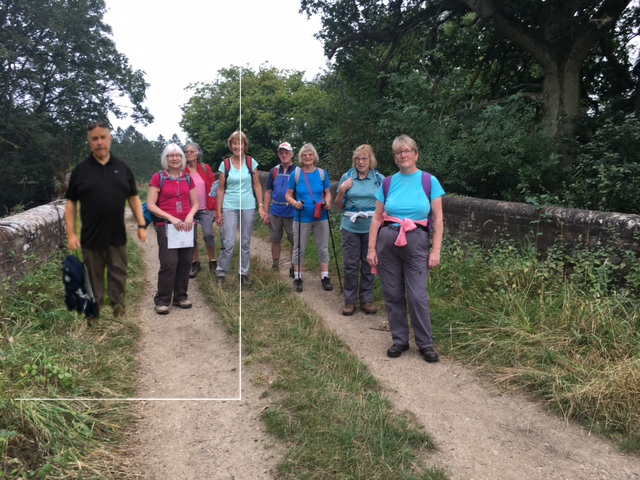 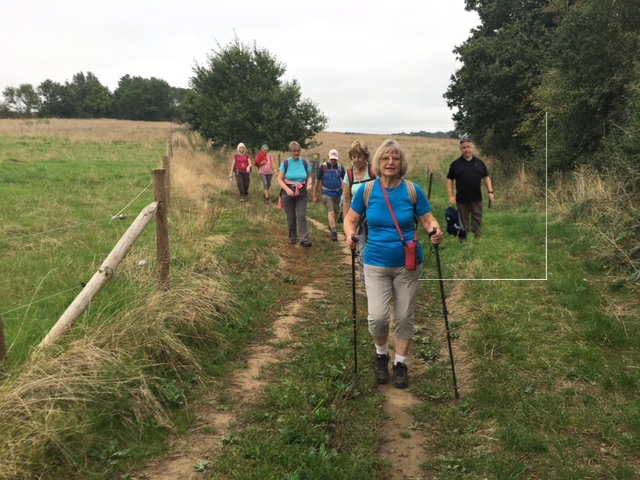 12 of us met at Ridgmont Station and enjoyed a selection of breakfast meals in the pretty café in the room which was once the Ladies Waiting Room. 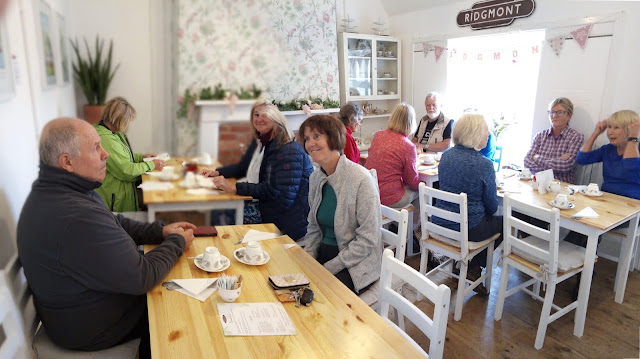 Following breakfast, a volunteer talked to us with great enthusiasm about the history of the station and the Bedford/Bletchley line.  Beryl tackled the purchasing of tickets at the station’s ticket machine and succeeded in purchasing tickets at a reduced group rate.
We then caught the 11.36 train to Woburn Sands where we alighted  after a 6 minute train ride passing through Aspley Guise.  We left Woburn Sands via some modern houses, across the fields to join the track beside the Woburn Sands & Aspley Guise golf course. 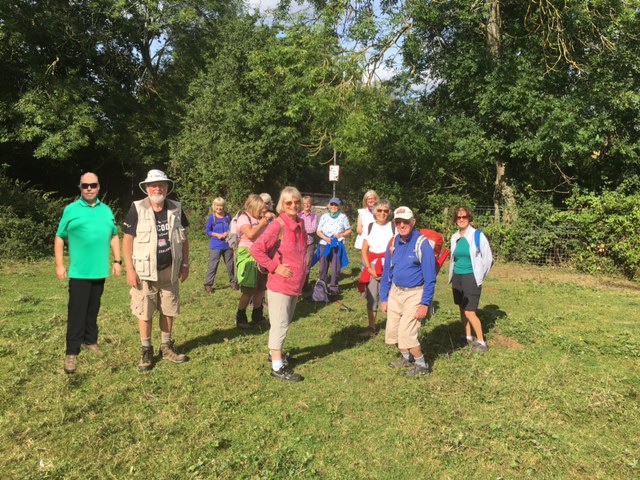 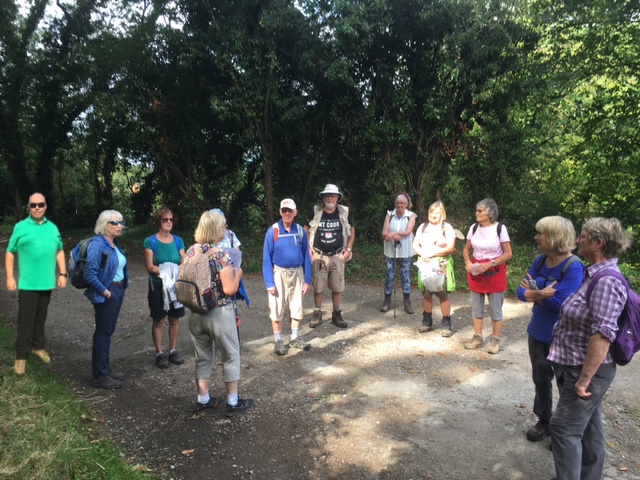 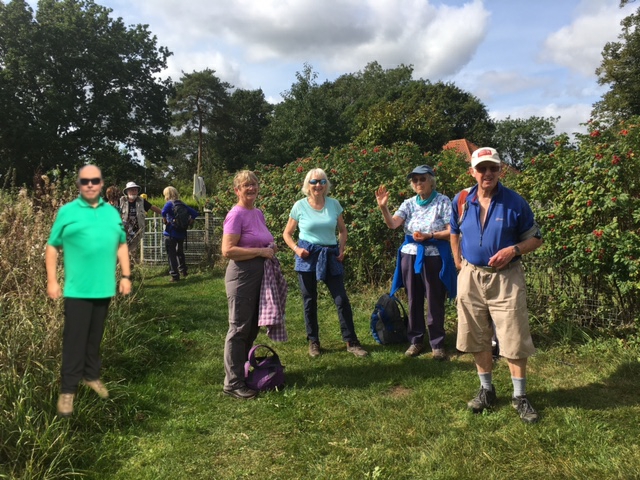 This led to Aspley Guise, where Penny told us a little bit of the history which included the part Aspley Guise played in World War II.  We walked passed houses ranging from pretty old cottages to more modern dwellings before we made our way across the fields to the outskirts of Husborne Crawley.
As we left Husborne Crawley, to our delight we came across a field of Alpacas – they didn’t spit at us!

As we continued along the field paths, we had good views of the spire of Ridgmont Church, Woburn Abbey Park and the traffic on the M1!  After a couple more fields, we crossed the railway line, went under the M1 to reach the car park.  Some of us returned to the station café and enjoy a cuppa in the lovely summer sunshine to end a very successful train ride and walk.

Eleven walkers including Programme Secretary Yvonne Bevan on her first club walk since Lockdown. We were so lucky to have such a late lovely Summers Day.
We left the car park and passed  the Duke of Bedford cottages and a new housing development which was very much in keeping with the older properties.
Amazing views of Marston Vale as we took a slow ascent up to Millbrook Church and then back down to the road on a very steep path.

We safely crossed the main road and again slowly ascended an idyllic walk through the forest. The more able did walk ahead and waited for us. We crossed the A 507 at the traffic lights. We continued round the edge of Warren Wood. Had a banana / coffee stop on the steps. Also plenty of water stops on the way. 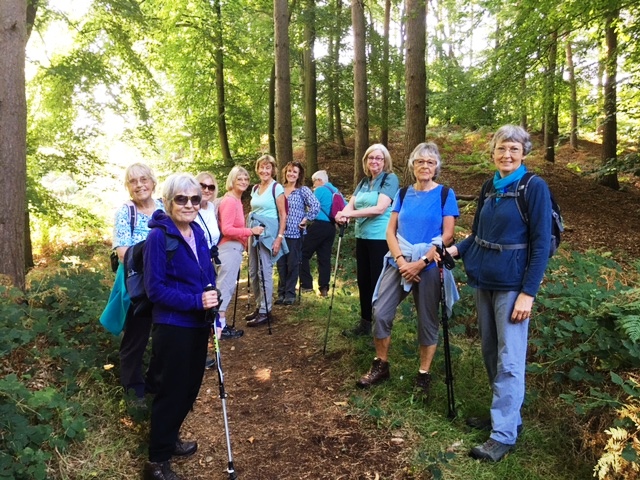 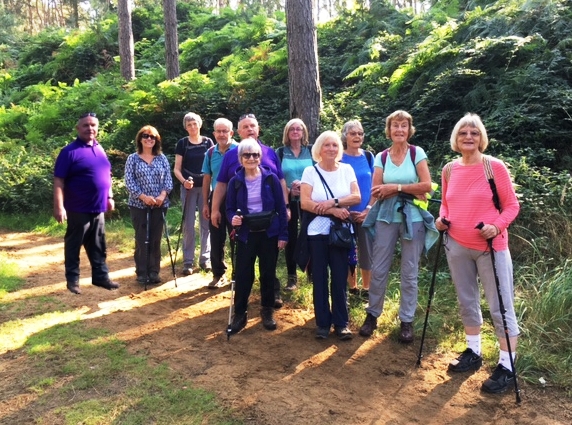 It was a bit muddy in places , nowhere near as bad as the last time. Hi Vis Jacket on to make sure we had a safe crossing back over the A507. We continued around the perimeter of Millbrook Golf Course. Had another stop to take in the view over Marston Vale and did a very slow  descent back to the car park. 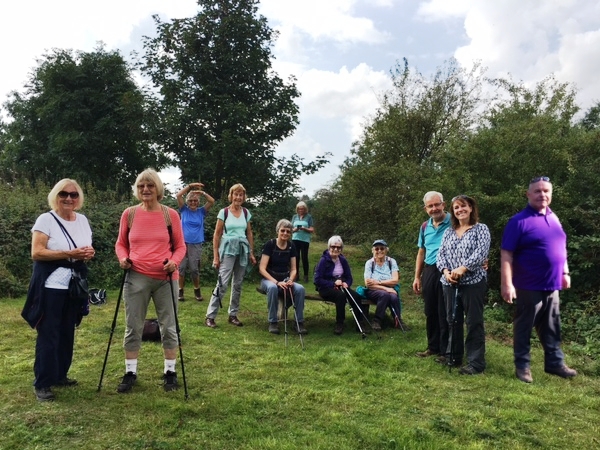 A really enjoyable walk for us all.       Nita McCarthy

This  walk was led by Sharon and started from Ampthill Park carpark with Beryl having to park far away from the others due to remote locking problems.

We stopped at the garden of a friend of Sharon's near Kingswood where we were treated to home made cake.. Later we walked past the Knife & Cleaver pub & the church in Houghton Conquest.

We stopped at a quiet glade where we had our picnic lunch & followed that by picking blackberries.

This 5 mile walk started form Gardener's Lane car park in Henlow    Another chance to enjoy a leisurely stroll along the beautiful River Ivel from Henlow to Langford Watermill with leader John.

This walk started at the N.T. car park and headed for the trig point in the centre of the Motte and Bailey. We then descended by a steep chalky path down to the nature reserve, a few of the party electing to go around the easier way. This is a wealth of chalk flowers and we spotted Eyebright, Sainfoin, Autumn Gentians and the parasitic wasp gall on Rose, known as the Robin's Pin-cushion. I had intended to have coffee break there, but it was too early and rather noisy as strimming was taking place over the the East and the smoke from their bonfire drifting over.

We descended steps and a path to the main road through Totternhoe and headed towards Eaton Bray. We stopped in a field of sheep to scrump some damsons - still a bit under-ripe, then in the next field had a brief coffee break before continuing.

We turned South with an excellent view of the Dunstable Downs ahead, then had our lunch at the rec ground it Totternhoe.

Next we ascended a gentle bridleway to the 'butterfly seat', and walked through the edge of the Maiden's Bower and the edge of the extensive chalk quarries.  We had a short water stop at the top of the next nature reserve and the party had a choice: descend down another steep chalky hill to hunt for the Chiltern Gentian, or take the easy route around. Beryl and I descended into the lovely chalk spoil heaps and the gentians were lovely, but all seemed to be the Autumn Gentian again. We reunited with the rest of the group and reached the carpark at 2pm.

Posted by ruth betts at 6:48 PM No comments: