A cold wind but it was dry with hints of sun and we walked briskly and kept warm. Under foot it was mostly grass and gravel and good on the feet.

We got to Steppingley Church at 11.30, half an hour ahead of time but never the less ate our lunch - or was it elevenses, enjoying the sun on a seat or in the porch out of the wind. The ladies looked around the lovely bright church. We then avoided a large ploughed field by continuing through the village. The rest of the route was mostly the Greensand Ridge Walk, but to avoid retracing our steps we diverted through Tyrells End to admire two ancient houses before returning the Church End Village Hall where we parked. A wedding was just about to start - a limit of 30 guests. How to keep the cost down!

led by Wendy and Richard Whalley 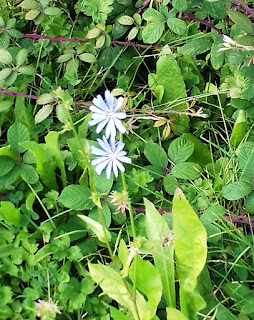 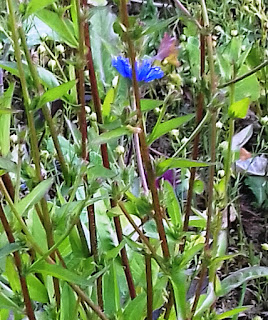 In lovely sunny weather we started from Marston Morteyne following the Jubilee Trail through old and new woodland to Marston Thrift. Unlike Ampthill Park, the blackberries here looked beautiful and ready to pick so Sheila managed to get a nice box full. There were lots of spectacular views in all directions. It  was a very enjoyable walk ending by the Manor House where the Club had Christmas Lunch . We also saw the Vicarage where Sir Captain Tom walked 100 miles for the NHS and the unusual Church with a separate  tower. Finally there were lots of beautifully carved wooden benches to admire.

The original walk in mid August was postponed due to a deluge of rain as we arrived at the West Car Park in Ampthill Park.  Therefore, the walk was postponed for 3 weeks.

When we arrived at the Car Park on 3 September it was dull and damp but at least it was not really raining.  There were 8 walkers in the group and a vote was taken at the beginning to decide if we should walk in 2 groups of 4 or continue with 1 group of 8.   The first photo shows the result of the vote - walk in 1 group.

Generally, we walked the perimeter of Ampthill Park, down near Ampthill Park House and up the Lime Walk where we saw badger slides.   Crossing Woburn Street we noted the new McCarthy and Stone Homes being constructed on the site of the old police station.

We then proceeded along the Alameda Walk to the Cenotaph and on across the heathers and silver birch trees of Coopers Hill.   Finally, the blackberries were located near the Rugby pitches down near the Ampthill bypass.   Unfortunately, the blackberries were few and far between – either dried and shrivelled, waterlogged or unripe.  Still a few of us made an effort and the results are shown in final photograph!

4 of the group returned direct to their cars and 4 had a drink at The Hub in the Park where we enjoyed a socially distanced, rainy chat under a big “sunshade”. 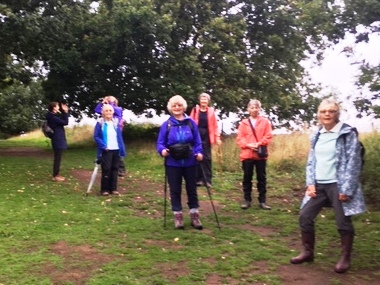 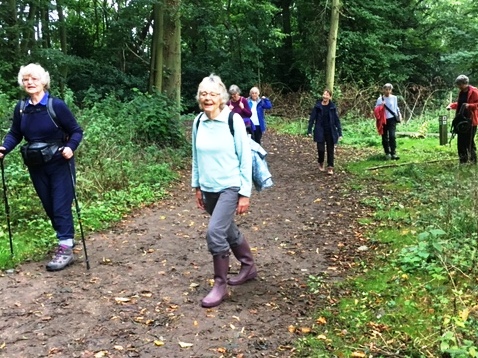 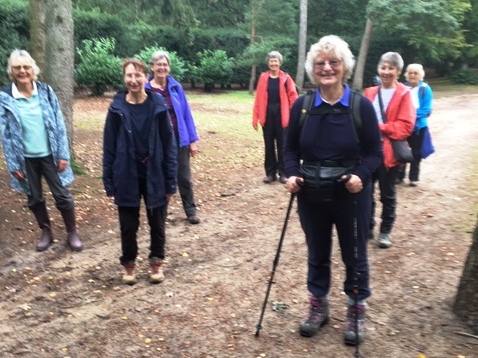 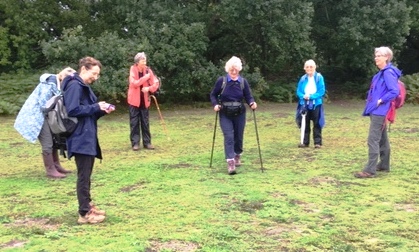 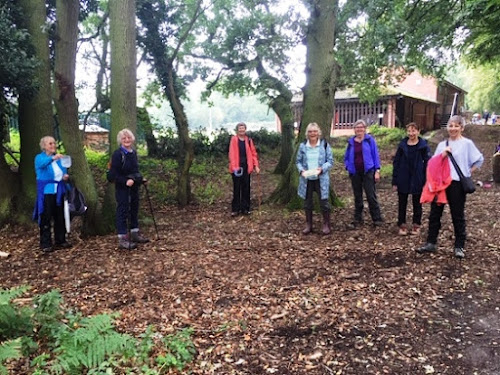