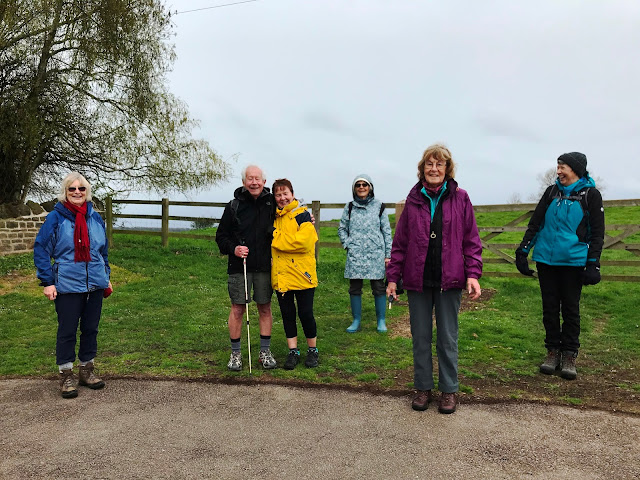 Dull and overcast but otherwise dry as we set out past Conger Hill and headed South, with the motorway service station in full view. This is an industrial themed walk!

We crossed the river Flit, past Woodcock and Hibsey Spinney, then through an un-rolled wheat field to cross the M1. It way busy! Next we crossed the railway line via a graffiti-decorated bridge and along an old quarry road towards Upper Sundon. There is lots of rubbish around there: perhaps we should have a litter-picking ramble one day. We then turned sharp right and descended steeply on some wooden steps into the scrub-land of the quarry. The Blackthorn blossom was fully out and the hawthorn leaves were opening in the sheltered areas.

We looked down on the quarry lakes. How did the burnt-out car manage to get there? Some men were down there, presumably fishing. Another area to explore one day!

We then crossed electricity lines, the railway line and the M1 again and came around the back of Charlton, having coffee break at the picnic tables behind the star. We had nearly finished when a group of 6 ramblers appeared- obviously with our tables in sight! They turned out to be the Dunstable Bogtrotters and we had a bit of a chat. They had promised sun and alpacas on their programme and had neither. I too was disappointed that the Alpacas had gone from the field near the Chalton Village Hall.

Shortly after we met a familiar pair: Linda and Rosemary completing their morning walk! Next industry was the sewage works and then the electricity sub-station. It had started to drizzle slightly and the wires were buzzing with static electricity.  Finally we passed the Sand Quarry and back past the ridge-and-furrow fields and Conger Lane.  Not the prettiest of walks, but interesting never the less.

The saying 'Rain before seven fine by eleven' was put to the test today. The first rain for a while, and it had to be this morning! I put my gaiters and overtrousers back in the rucksac, dressed warmly and set out with grave misgivings, considering a way of shortening the walk if necessary. The rain had stopped as we gathered outside Tingrith Church and before long the sun came out! We all stopped to shed a few layers and to put away the hats and gloves.

We walked through Rad's End, and paused at the 'Eversholt Waterfall', where we had a group photo and puzzled over some flowers. Ruth thought it was Broomrape. Not too sure as my flower book says it flowers in June.

Update - Ruth went back with the flower book and to take a better photo. It is Butterbur. How boring. I didn't realise the leaves appear after the flowers. 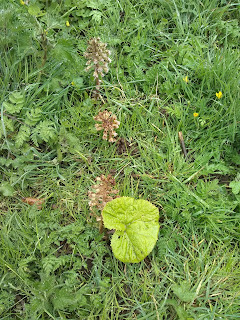 We walked across a field to the Greensand's Ridgewalk, much to Tony's surprise as he was trying to second-guess the route. Through some woods and windproofs went back of as we crossed a field of wheat which bizarrely had daffodils scattered about! Someone thought they were remnants from a crop to support Macmillan.

We reached Segenhoe ruins at 11.30,  wandered into the derelict nave had a coffee break.

The return journey passed a trapped pheasant but was otherwise uneventful. We had lunch at 1pm at the Millenium Pond at Eversholt Church-End.

Finally, we crossed Washers Wood and returned to the cars via Castle Farm. No rain at all!

Posted by ruth betts at 4:34 PM No comments:

Starting at the Aspley and Woburn Golf Club car park and well wrapped up against the biting wind, we set off at a brisk pace to Aspley heath, the steep upward climb slowing us down and resulting in removing a layer of clothing at the top. We then walked past Woburn Golf Club, where golfers were braving the wind now that outdoor sport is allowed.

After Hundred’s Farm we had a coffee break on some convenient logs then took a right along a path through Charle Wood, part of which had been cleared to extend the golf club. At Landon hill Plantation we saw families playing in and outdoor pioneer setting and stopped to ask what was going on. The site was being developed for outdoor education.

We skirted Woburn Deer Park and stopped at a large log to have our lunch by the large secluded lake. Fleeces went back on! A swan was busy building a huge nest, and a pair of widgeons (I think) were busy with courtship dances. We worried that the ranger would move us on, but we were close to the path and screened from the patrolling land-rover.

There is no doubt that the Woburn VH playground would have been very exposed to the wind! With our hands chilled, we set off into the wind towards Aspley Guise and back to the car-park.

Posted by ruth betts at 3:42 PM No comments:

This was the first group of 6 club walk of the year 2021.
Our walk on Thursday 1st April went really well. We were lucky with the weather too for a change, no hurricane or monsoon😅we were joined by Maureen and Malcolm, John Dixon and Beryl. It was lovely to see them we had so much to catch up on we didn't really think of taking photographs, sorry.
We started our walk at Wrest Park, walking to Shillington and on to Lower Gravenhurst. We called in at St Mary 's Church for a coffee break and were lucky enough to find it open!
Where we signed the visitors book on behalf of Toddington  ramblers x 6. Then back on to Wrest Park.
Posted by TonyR at 9:21 PM No comments: