The walk commenced at the same car park as the last walk, near the canal at the bottom of Campbell Park. There were 19 walkers, but fortunately 4 decided not to stay for lunch as I had only booked for 15 at the cafe
We started by walking along the western edge of Campbell Park up to the Rose where numerous pillars mark every event or day one can think of.
We then walked up the the viewpoint where we had our photo taken. 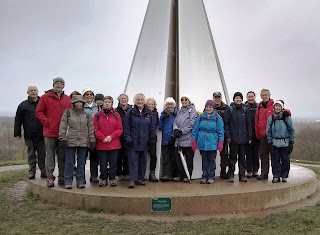 Unfortunately the weather was misty so there were no great views. We then walked down to the canal where we passed the new Campbell Wharf marina with its 111 spaces, nearly all of which were full. At bridge 85 over the canal we left the canal which was fortunate as logging was happening further along. This path led past a small children's playground where we stopped for our coffee break.
After this we soon reached the river Ouzel and followed this north until Willen Lake was reached. We skirted the western side of the lake calling into the pub for a much needed comfort stop.
We crossed a bridge and went across the peninsular  which divides the lake into two and so we arrived on the eastern side. We the followed the lakeside north past Willen hospice to reach the slopes near the maze. We skirted the maze and climbed the hill above the Japanese pagoda. At the top of the hill we descended many steps to cross a main road before arriving at our lunch stop at Camp Hill. Here the 4 who were not stoping left us to make their 3/4 mile walk back to their car. 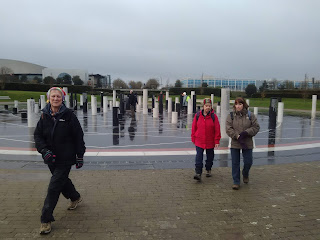 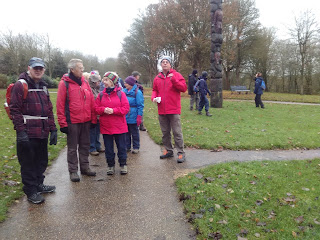 On entering the cafe we were greeted by the manageress who showed us to our reserved table in a large alcove.
After perusing the menu everyone appeared to want lasagne, but as there were only 9 portions available some were disappointed and had to have another dish. However everyone seemed to enjoy their food as shown below. 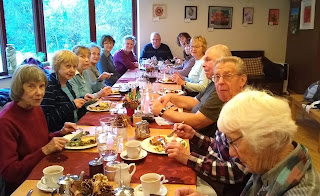 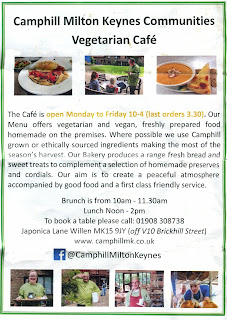 After our meal most walkers decided to visit the Camp Hill shop where a variety of goods were purchased. We then walked the last portion of the walk by going over the canal and turning left the reach our cars. Unfortunately one car had a puncture but this was quickly attended to by fitting the spare wheel.
The trace of the walk is shown below with the dot showing the start and finish point. We walked in an anti-clockwise direction 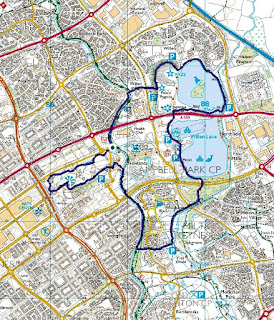