We met at Harper's cafe with no difficulty, thanks to the very clear travel instructions (and a little help from Google maps and sat navs): for all of us it was a new part of the county. The thirteen walkers including two new members- Brigid and Andy Connor, plus Nita, Beryl, Penny, Malcolm & Jean, Tony P, Tony R, Hilary, Lynn, Ruth &  Joan.We recognised with delight some of the same ramblers from Thursday's walk and picked up previous conversations.  The walk originally should have been five miles but when doing the recce there was a large herd of cows with their calves on the Common land so a detour was necessary for safety reasons. The terrain was easy with lanes and good dry paths, blackberries were just starting to ripen and there was a glorious view of extensive golden wheat fields. After passing a very busy football fun day on the edge of Caddington  Beryl had found a perfect resting place for us to have our  banana / coffee break. so we stopped at a lovely seat in a copse. Some ramblers declined to sit down saying it was too low or too unstable! 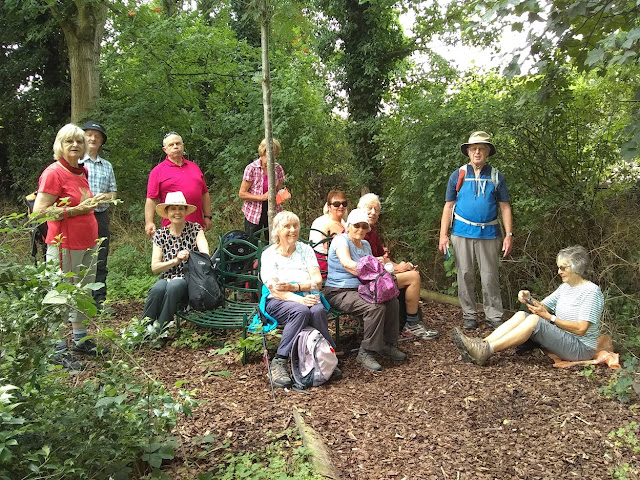 After coffee we noticed a change as when we did the recce we crossed a field of very ripe dry rapeseed, a track was clearly there for us to do a slow ascent to the top of the field. However today there was no track at all as it had been ploughed which made it very hard, we took our time, Penny and Joan did very well. We were certainly ready for a water stop at the top. However the final part was along an easy wide woodland bridleway alongside a very noisy Clay Pigeon practice ground. We could have done without the noise, also there were plenty of planes taking off from Luton airport. We arrived back at Harpers dead on time at 1.00 pm. Ruth had to leave, but twelve of us enjoyed a very nice lunch sitting in the sunshine. We all made a toast to each other as we were all pleased to be together again. On our way to "New Normal ".