Beryl’s granddaughter was able to save a life at a railway station shortly after completing her first aid course. Inspired by this and slightly concerned about her own ability, Beryl organised this two hour course which was well attended and could be extremely useful should the unthinkable happen on a walk. 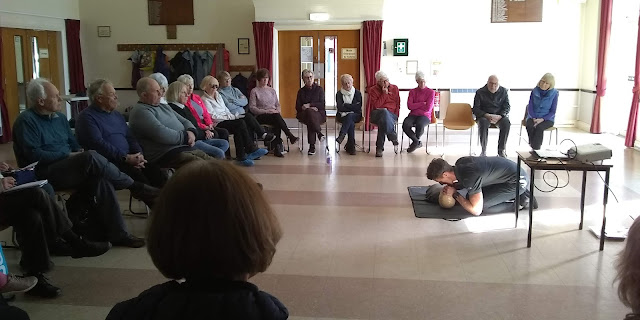 The tuition centred on CPR: we were shown how to administer this and in small groups we were able to practice it on a dummy.

Danger:  is it safe for you to help?
Response: ‘Can you hear me? Can you feel this pressure?
Airway: tilt the chin up and check for obstacles in the mouth
Breathing: is the chest rising and falling?
Compressions: start CPR urgently.

The brain only has 4 minutes that it can survive without oxygen before it deteriorates so it is important to start CPR quickly. Send someone to call 999 and to fetch a defibrillator.  Begin CPR: we were shown how to interlock the hands, put the weigh above the sternum and to keep the elbows straight. The compressions have a depth of 6cm, which is quite a lot, and need a rhythm of just over 1 per second. Give 30 compressions and two mouth to mouth breaths, if you feel that you are able to.  Continue until help arrives. Don’t worry too much about getting it right: any attempt is better than none. 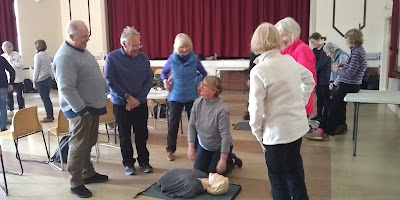 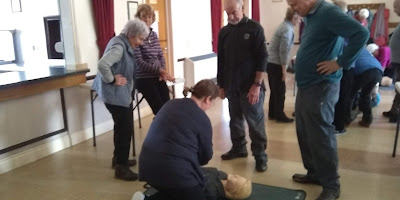 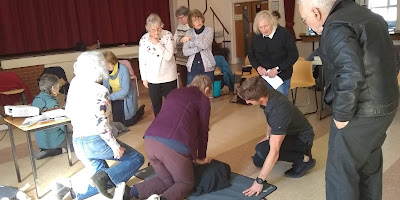 We then divided into groups and practises on a dummy while James came around to check that we were doing this correctly.

Back in our circle we were then shown how to cope with a child: give 5 rescue breaths first as he is more likely to have had a breathing problem than a heart condition, then 5cm depth compressions

Next, we were shown a baby. We were reassured that with the baby’s soft bones there is a lower chance of internal injury than with an adult, and this time it is 4cm depth. 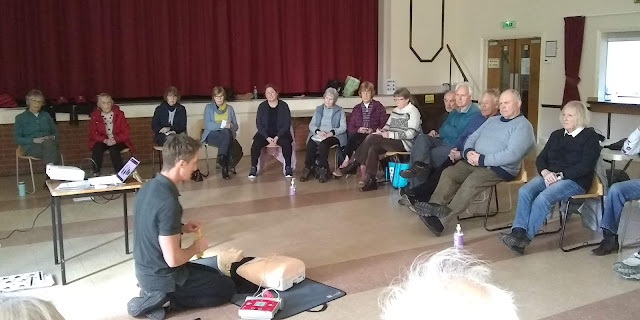 We were then shown how to use a defibrillator. You need to dial 999 to get the keypad code. The paddles are placed across the chest as in wearing a sat belt, and not to worry as it talks you through everything.

Finally we were taught how to cope with choking: back slaps and as a last resort, the Heimlich Manoeuvre if back slapping fails.

It was an excellent 2 hours. Many thanks to James Gardner, the trainer, and Beryl for organising it.