We met at the NT car park on Beacon Road near Ivinghoe Beacon but before starting out Lynn asked if everyone would like to extend the planned 7 mile walk by walking up the Beacon, which would be an extra mile or so. Although it wasn’t sunny, it was quite a clear morning, meaning the views from the top should be good, and everyone agreed to do that. Therefore we went down from the car park to the valley below and walked along, then up to the Beacon. It was a little windy at the top but thankfully not too chilly. A kind gentleman offered to take the photo of all of us. 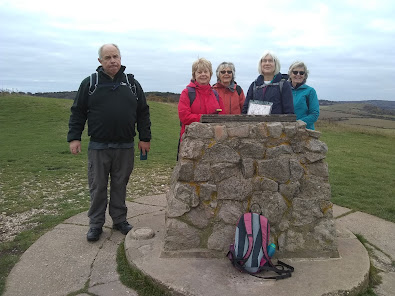 The route for the walk followed the Ridgeway, which took us down towards and across the road and along past Inchcombe Hole, which was where we stopped for elevenses enjoying the view from there. 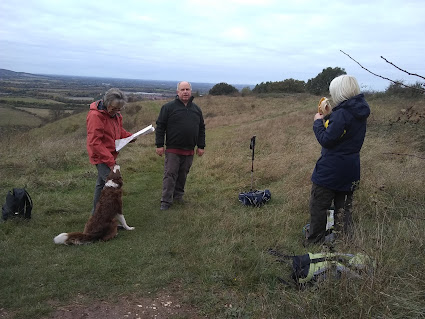 We carried on on the Ridgeway, going through the car park on the Ivinghoe-Aldbury road and up the small hill which Ruth said was known as Paul’s Knob! That’s not on the map!!

As we walked round the top of the ridge, we looked out at the Pitstone windmill and Ivinghoe village beyond; the expanding houses at Pitstone; the chalk pits where an exhausted pit is now a lake and further round the lager College Lake and Marsworth Reservoir. 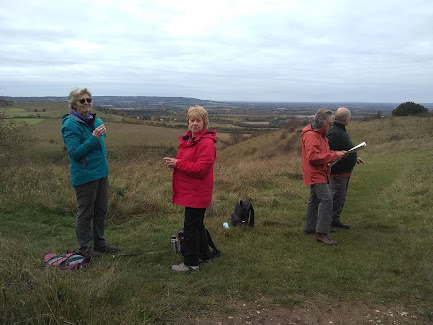 Our route then took us through Aldbury Nowers nature reserve - lovely walking through the woods at this time of year - and then out of the reserve, still following the Ridgeway until reaching a crossroads of paths where we turned left onto the Hertfordshire Way just to the west of Aldbury. 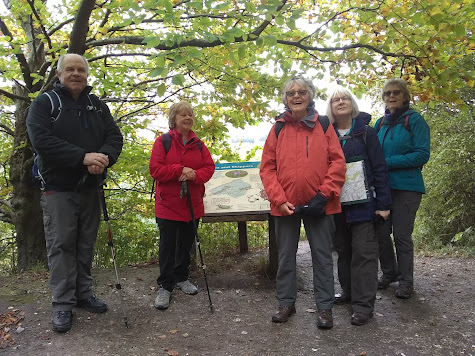 Once we reached the road, we had to walk a short stretch to get to the next footpath heading towards the escarpment. Lynn had decided we would get this steep climb done and then have lunch rather than lunch at the bottom and have the steep climb to do straight afterwards, so it was a case of slow and steady up this section, finally reaching a perfectly placed fallen tree trunk for us to sit on and eat and have a well-earned rest! 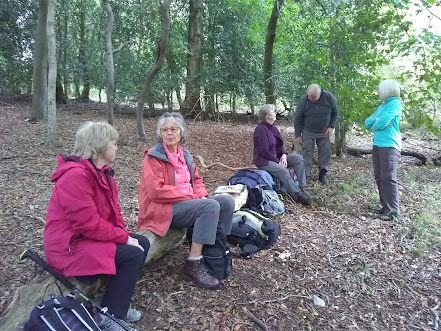 From our lunch spot, we walked round to the Bridgewater Monument where we could make use of the facilities and then headed north from there past Moneybury Hill Barrow, although that is now fenced off so we couldn’t see the barrow itself. We stayed on the same path up to Duncombe Terrace where we turned right to reach Beacon Road. From there it was about half a mile back to the car park going along a wooded path running parallel with the road.

Although an ice cream van was there to greet us, it was not quite warm enough for any of us to give him any business!