This 4 mile walk, which had 19 members walking, started from the lay-by parking area between Woburn & Woburn Sands. The day was dry but started off cloudy, blue sky appeared later on however the temperature stayed about 6 degrees. We left the car park & walked into the woods immediately turning off the main path on to a very narrow path parallel to the road. this led to another wide path near Fullers Earth Lodge. Here we carefully crossed to main road and walked up the wide sandy track past the old quarry & derelict buildings before descending to re-cross the road & re-enter the woods.  Soon we stopped for a photo below.

We carried on & joined Sandy Lane, the old road between Woburn & Woburn Sands before the now main road was built. We followed this before turning off for a coffee stop at a couple of green metal picnic tables near the sand pit. Some members used these tables whilst other preferring more natural facilities sat on a large fallen tree trunk. 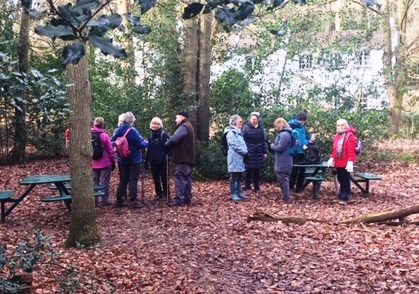 After our break we rejoined Sandy Lane for a while before going through a gap in the fence to join a parallel track through the woods. This led to the Longslade Lane car park which we passed through before turning off uphill through lines of conifers. Soon afterwards we arrived back at our start point.
One can see from the map below that the tracks on the ground & the footpaths marked on the map often do not coincide. Indeed trying to find the marked paths is impossible in these woods.
Posted by TonyR at 8:18 PM